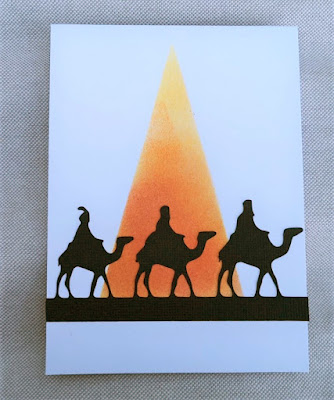 Today, I'm honoured to be Guest Designer at Casology! 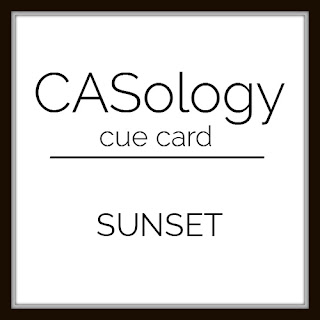 The cue card is 'sunset' and for my card I made an unconventional Christmas card, featuring the three kings setting off at sunset. I thought the triangle was reminiscent of both pyramids and Christmas trees, and made for a more cas look.

Once I had the idea it was very simple to make ... well, it should have been! Using my Silhouette Cameo digital cutting machine, I traced and cut a clip-art image of the three kings. I cut a simple triangle shape and inked through it in sunset colours, I had four attempts at this before I got one that had ink in the right places, not the wrong ones.. simple cards come easily to me but clean...not so much!

Thanks Casology for having me as GD.

The Holly and Ivy

I think the card looks amazing and what a creative idea for the sunset-love you thought of the Xmas tree. A stunning CAS card and so good to have you as GD x

Many congratulations on guesting Marina x. What a striking card and a creative use of the 'sunset' on your CAS....'Clean card'...lol x.

This is a lovely card, and I really like your triangular sunset. It really makes those silhouettes stand out. Thanks so much for being our Guest Designer at CASology.

Congrats on your guest designer spot, love your card, that ink blending is gorgeous and works beautifully with your silhouetted camels xx

This is beautiful Marina!

Congrats on your GD spot! A fabulous card, unique and beautifully done!

This is so stunning, gorgeous card Marina!!

I love this! True CAS perfection~

Oh the joy of inking through a mask, well done on doing it so well. The whole concept of this card is fabulous x

What a beautiful card.
Thank you for participating in our challenge.
Big Hug Bianca
The Holly and Ivy Christmas Challenge blog.