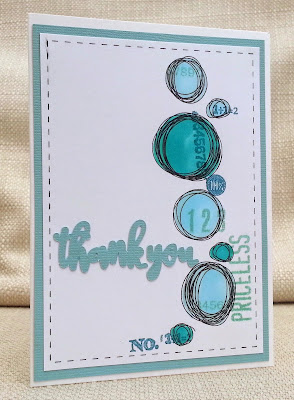 This card, using the sketch from Crafty Boots  was made using technology (Silhouette cutting machine) and traditional methods.

I wanted a row of sketchy circles, but I don't have any stamps (and don't even think about freehand!) , so I made some in Silhouette Studio and used the sketch pens to draw them electronically. ( The border was drawn at the same time).

I had to experiment with colouring them. I tried watercolouring with ink but the pen ran too much, so I used alcohol markers.

Then I used one of my favourite stamp sets (7 Gypsies 'numbers' ) to stamp numbers and words. Finally, I electronically die-cut  the sentiment.

As well as Crafy Boots, I'd like to enter:
That's Crafty  number's up
Addicted to Stamps  anything goes
Simon Says Stamp Monday  thanks
Tuesday Throwdown anything goes 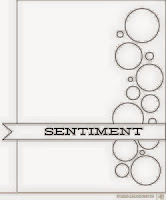 Oooh, this is FUN! Those sketch circles are uber fun! Thanks for your visit!
Shanna :)

I love your take on the sketch challenge, your blue and white design looks so clean and fresh.

Thank you for playing along with the Crafty Boots Sketch Challenge.

Love it! Great take on the sketch. The circles have a super grungy feel which I love. Thanks so much for playing along with ASM this week!

Super cute card. I had to pin it.

This design is so youthful, would be perfect as a card for a teenager too, just use a birthday sentiment and voila. I'm always looking out for ideas for this age group.

Love your sketchy circles and what a great idea to do them on the Silhouette. Thanks for joining in at Crafty Boots Challenges this time.

Really great use of the shapes and lovely clean looking colours

Beautiful monochromatic card! Thanks for playing with us at ATSM!

Wow! This has got to be technology at its best! You were so clever to make the scribbly circles with the sketch pens! Way to nail it! And I adore this color palette. It is so simple, yet also filled with amazing details. I thoroughly enjoyed seeing this card and reading about its creation. Thanks for the inspiration and for sharing your talents with us for this week's Simon Says Stamp Monday Challenge!

Such a fun way to say, "Thank you!"
The circles are so fun and artistic. Love it! I'm really impressed by how you created this. I have a Silhouette, but haven't attempted to use sketch pens...yet. :)
Thank YOU for joining us this week for the Simon Says Stamp Monday Challenge. It was fun visiting your blog. ~Michelle

This is just to let you know that you have been placed in the Crafty Boots ‘Sketch’ Challenge. Many congratulations.

We are offering the winner and two runners up from this challenge Guest Design Team spots for a future challenge, which starts on 20 July. Please contact me at CraftyBootsDT@gmx.co.uk if you would like more information about participating in this new challenge.

Don’t forget to collect a copy of the Crafty Boots Challenge badge from our blog.