Guest Designer at Stick it Down 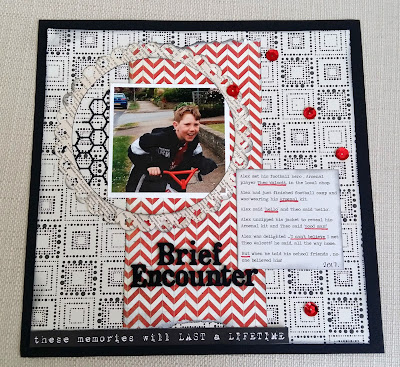 Today , I'm proud to be a guest designer at Stick it Down .

Here's the sketch for their single-page challenge: 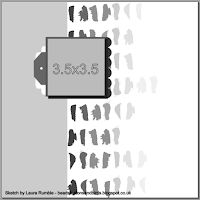 I hope you can see how I've interpreted the sketch in my layout. I've used lots of random, old stash, all different brands. The layout tells the story of when my son met one of his sporting hereoes, by chance, in the local shop.

The journalling reads:
Alex met his football hero , Arsenal player Theo Walcott, in the local shop.
Alex had just finished football camp and was wearing his Arsenal kit.
Alex said ‘hello’ and Theo said ‘hello’.
Alex unzipped his jacket to reveal his Arsenal kit and Theo said ‘Good man!’
Alex was delighted …’I can’t believe I met Theo Walcott!’ he said, all the way home.
But when he told his school friends , no-one believed him!
Shame I have no photo of the actual footballer, but that might have been too much of an intrusion when the poor guy had just popped in for a pint of milk! So just a photo of my son glowing all the way home.
Thank you very much, Stick it Down , for having me as Guest Designer.

I'd like to link to :
Scrapbooking Top Fifty  real not perfect - the photo was taken just after the event, not as it was happening.
Posted by Marina at 06:00