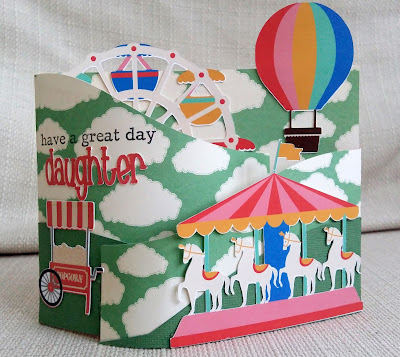 My daughter is a great supporter of my crafting and that makes me feel I should make her something slightly spectacular for her birthday card. So, as usual, I couldn't think of what to make her until I saw the challenge at Cut it Up, to make a bendy card.

I've only ever made a bendy once before, and that was quite a simple one. So, in addition to the fantastic inspiration from the Cut it Up DT, I searched online for some good examples. I found this one by Crystal, which I used for inspiration.

Everything was cut on the Silhouette electronic cutting machine. The (pre-coloured) images are by Lettering Delights - as I had left this till the last minute, I decided against using the layered SVGs and instead, used the graphic files which I traced and 'print and cut'. The sentiment is a Clearly Besotted stamp.

As well as Cut it UP, I'd also like to enter:
Stampin Royalty just as I'm about to link up I notice it says 'dies' not 'die-cuts' and I wonder if digital cutting counts or just metal dies... ?
OohLaLa  die cuts
Crafty Friends anything goes
Creative Craft Cottage anything goes
Posted by Marina at 12:44

So cute and so very clever too! Thanks for joining the challenge at Ooh La La!

Cut It Up Challenge Blog said...

Wow! This is a spectacular card! Your daughter will love it. So glad we inspired you to go bendy!

Thanks for joining us for our Bendy/Scene Card challenge at Cut it Up!

This is so fun, Marina! I love all the little details that are included! I've never done this type of project before, but after seeing this, I might just be tempted... ;)

This is an awesome creation Marina!!!!

This is fabulous Marina! Love all that detail... I made one for my friend Pat as a special some years ago ... Funny I've never done a bendy card since. Anyway your daughter will surely be thrilled!

Hello… Thanks for joining our ‘Anything Goes’ challenge with your lovely card… Please join us again next time. Good luck!
[Diane Louise, Team Leader for Crafty Friends Challenge Blog]

I always try and go the extra mile for my family members cards. For the same reason, they're great supporters. This looks really spectacular!

This is so cute, I love that fabulous scene you created! Thanks so much for joining us at Crafty Friends!
Tammy x

such an unusual design it's so cheerful love the colours

This is such a fun card, thanks so much for sharing with us at Oh La La Creations. Michellex

Hi Marina, This is a lovely card! I'm honored that you were inspired by a card I created and shared the link. :)