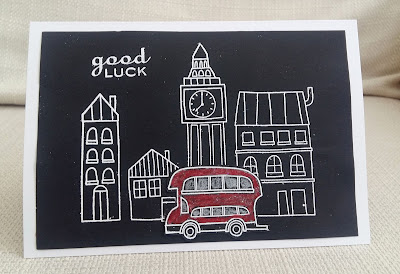 Every year I like to set myself a crafting challenge, but my self-set challenge for 2016 wasn't as successful as I'd hoped. So....if at first you don't succeed- set yourself an easier challenge!

I seem to have quite a lot of mass-manufactured cards that I've been given at Christmas and birthdays and kept because I liked them and thought I'd steal some ideas from them for my own cards. So this year I'm going to work my way through the pile of shop-bought cards and try to beat the professionals by poaching their ideas and making cards that are even better! (Well I can try!)  I contacted Simon Cowell , but unfortunately he wasn't available for judging so, officially,  my challenge isn't to beat them, just to CASE at least  24 cards during the year.

So, for my first Pro-Am Showdown I chose this Christmas card: 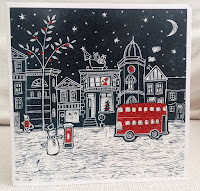 What I liked about the professional card was the black/white/red combo , the glitter on the red accents and that it had a London theme - I live near London and commute in every day. My own twist was to make it a 'good luck on your new job' card.

I used My Favorite Things stamps (plus the sentiment by Persona Impressions)  and heat embossed in white. The bus was coloured with pencils and cut out and glittered - originally I used Wink of Stella but it just didn't show enough, so I used fine clear glitter. It would have been better if I'd had bright red glitter glue.  I know in the photo it looks like I've got stray embossing powder everywhere but in fact it's actually bits of stray glitter catching the light in the photo.

I must confess that I think the professionals have won this time. Their scene has a bit more interest and their glittering is better. But I think I gave it a good go.

What a great take Marina and a fab idea. I think I first started following your blog when you did the empty the box one and I was impressed at how you used most of the stamps .

Brilliant card, Marina. What a great idea to CASE a bought card, much prefer yours though as it's so striking. xx

Uber cool challenge theme you've chosen for yourself this year. I've been waiting to know what you'd choose and I love it! I see why you've hold on to that Christmas card, what a fab card to case and I think you did a terrific job turning it into a non Christmas one. Very London like:)

I think that's an awesome challenge for this year! What an interesting project, and so much scope for different styles and approaches. I love your take on this card. The colour combo is a really inspiring one, and I like that you've managed to clean up their look into a CAS card which I think adds to the impact. Thanks so much for playing along with us at Less is More :)

I love your idea of using a black background and white outline...really makes the image pop! Thanks for sharing at Less is More!

What a terrific card. Never thought of red on black!!!

Amazing challenge to set yourself Marina and this first card is a wonderful start.I like the idea that yours isn't a Christmas card and you made it your own

What a super idea!! This is brilliant!

A wonderful idea to set yourself a challenge like this, and a wonderful take on the original card too. Love the chalkboard look. Thank you for joining us at Crafty Cardmakers.

this is fabulous i love it Thanks for joining us at less is more this week. Jen xx

Oh I think your card pretty much matches up to the professionals. Great idea to incorporate the London images for a Good Luck card and love your take on our new beginnings challenge. thanks for playing along at Less is More this week. Sarah

Super cute!!! Thank you for joining us at Make My Monday, good luck!!! Amy DT

What a great idea of a self challenge and what a great card, love the pop of red glitter too, thanks for joining us at Crafty Cardmakers, Jac x

What a great challenge to set yourself, and you've done a great job here. Love the London theme for this card and perfect for our challenge.
Thanks so much for sharing with us at Less is More, Anita x

What a great challenge! I love this idea and may have to try it myself. I think your take on the original is awesome. Thank you for sharing your design in our "New Beginnings" challenge at Crafty Cardmakers.
:) Pam

Stunning card with perfect red accent...thank you for joining us at ATSM this week
Hugs...Zeljka DT

Love the challenge you have set for yourself. Very interesting. All the best achieving it. Your CASE is gorgeous. Love the black background and the wonderful pop of red. Thank you for joining us at Make My Monday Challenges. Best of luck.

Love this card , this is just one stamp or several ? I would like to try this.