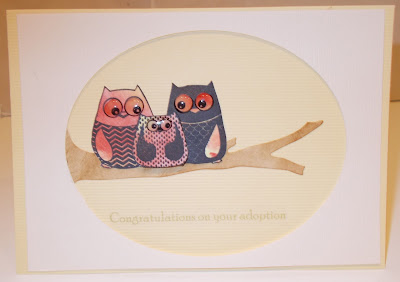 One of my brothers adopted a son almost a year ago, and the final court hearing , where the adoption is officially finalised,is coming up.

I covered white card in two colours of Distress Ink and stamped the owls stamp (Aladine) twice. I cut the little owl out and stuck it on the other image with 3d foam. I inked some card in Brushed Corduroy  and cut out a branch (Leabilitie). I cut an aperture and printed a sentiment onto Safmat. I added 3d Glaze to the owls' eyes.

I'd like to enter this for:
Casology Care
Artful Times Clean and simple
Cards in Envy Wings

Marina, this is a super card for such a wonderfully exciting occasion! I'm sure your borther and his family will treasure it...the owls' eyes are particularly adorable!

A wonderful idea for a card for an adoption. Hope they all live happily ever after.

What a lovely occasion to make a card for. It's a lovely thought and a fab card.
Beryl xx

A lovely card for a happy day :)
Thank you for sharing it with us at Artful Times
Von ☺

A lovely card, soft and sweet.

Perfect card for the cue card this week! Love your little owl family! Thanks so much for playing along with us at CASology this week!

Congrats to your brother and I love those owls! Thanks for playing along with CASology this week!

What a lovely card-and just perfect for such a special occasion :) Those little owls are just gorgeous !
Best wishes,Nessa xx

What an adorable image of the owls - perfect for the occasion - a really lovely card!
Alison x

Great take on the theme - I hope you'll link up at 52 Card Pickup this week!

what a wonderful interpretation of the cue word!! your brother will love the card... thanks so much for playing along with CASology!

Brilliant card I love owls and these are so sweet. Hugs Sandra X

Fabulous card and I love why you made it, thanks for sharing. Your little owls are adorable too. Thank you for playing along at Cards in Envy.

Hope all goes well with that final meeting. It's a lovely card to celebrate such an auspicious occasion.
Thanks you for joining us at Artful Times. Hugs, Neet xx (I have been away, sorry I am so late)